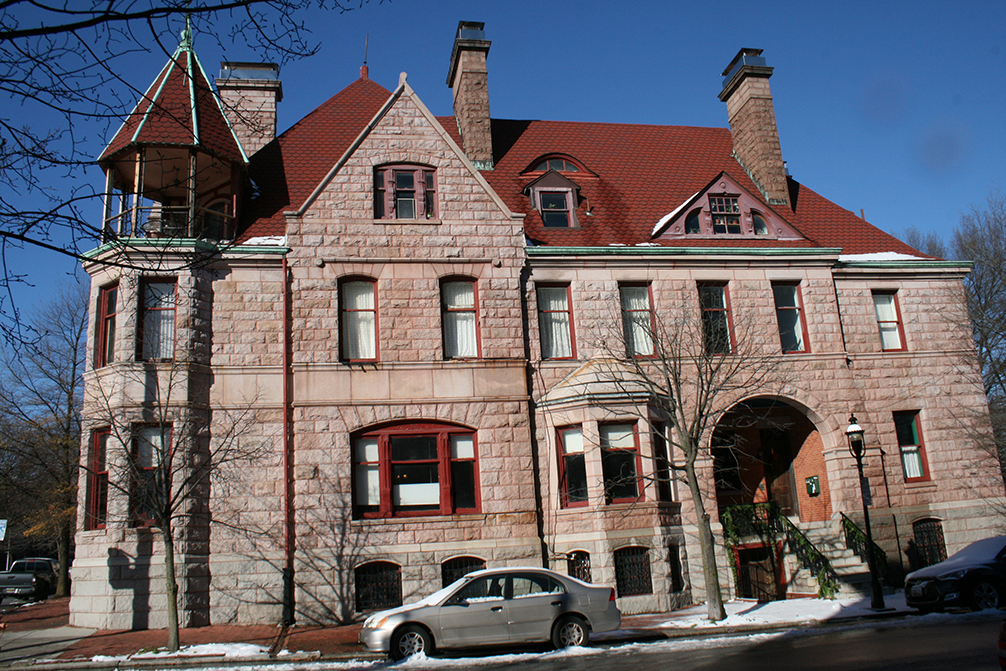 Richardsonian Romanesque is one of the only architectural styles named for an architect. It is a big, robust style popularized by a big, robust man who habitually wore a monk’s robe to accommodate his bulk.

In an era when nearly all designers looked back to Classic Greek and Roman architecture, Henry Hobson Richardson (HHR) was inspired by the later Romanesque architecture of southern France he sketched while attending the Ecole des Beaux Arts in Paris. Richardson appropriated the massive walls, round arches, arcades with squat columns and limited carvings, but added asymmetry and eyebrow windows. HHR’s romantic reinterpretation was the rage for large public buildings in the late 19th century, and residential examples, like the Hawley-Hutzler House, are rare.

Salvador Dali melted. Picasso was blue then cubed. Jackson Pollock dripped. Once you know what to look for, it is not hard to spot great artists by their iconic styles. The same is true of Boston based architect Henry Hobson Richardson, one of the greatest 19th century architects, and namesake of the Richardsonian Romanesque style which was the inspiration for the design of the historic 1887 Hawley-Hutzler House. Fitting, considering Richardson approached architecture as a fine art.

I do not know if I can adequately express the passion that I have for this restoration project and the pure admiration I feel for the architecture style. But I will try.

Richardson applied the Romanesque style to large public buildings, including Boston’s famous Trinity Church. But when he adopted those same colossal forms to smaller buildings like the Thomas Crane Public Library in Quincy MA and residential buildings, that is when he made Romanesque his own.

Like Romanesque, Richardsonian Romanesque is synonymous with structure and solidity. What it is not: cold, flat, or ordinary.

It is dark wood, but warm. It is open, but intimate; it is austere, but welcoming; it is functional, not untouchable; it is fortress-like, but approachable. Consider the undressed stone of the exterior, the fairy-tale corner towers with their tapered roofs, and the light from the arcaded stained-glass windows creating their own art. The massive arches seem to break through walls of stone. The enhanced entryways feel like a medieval great hall. It is structure with emotion and depth. Richardsonian Romanesque lets you know you are home.

The Hawley-Hutzler House is a beautiful example of the Richardsonian Romanesque aesthetic. Staring at the façade, I immediately spy the square and geometric raised panels of the massive front door with the signature arches and their decorative glass windows. Another giveaway is the rockface stonework that combines rough square and rectangle ashlar blocks.

Richardsonian houses centered around a living hall with a grand entrance, staircase, and fireplace, surrounded by wide-rounded arched windows recessed deep into the masonry. The Hawley-Hutzler House is no exception. Knowing there is an entire mansion to experience past this entry way, I still do not want to leave it. A space comes alive with light, even when no one is in the room. That is exactly what happens in this entrance.

The parquet floors with detailed inlays, the intricately carved stone fireplace, and the latticed features of the staircase surround absorb the light into every nook and niche. Is it even possible to see the heaviness of the brilliant wood, but simultaneously experience the lightness of the space? It is!

The decorative elements in Richardsonian Romanesque houses were often simple. The architects used geometric shapes instead of floral patterns. The fireplace in the former Music Room of the Hawley-Hutzler House includes a surround with squares and a hearth with circles that mimic the semicircles of the arches. Other decorative details associated with this style can be found throughout the house, including chevrons, zigzags, diagonals, rectangles, and lozenges.

To appreciate the style of Richardsonian Romanesque is to celebrate the sexy, curvy swelling forms of its structures. The mysterious beauty and femininity in every arched opening of every door on this house; every rounded corner that seamlessly forms walls; the turret with its conical roof overlooking the city, or the bas-relief cupids on the cast-iron fireback in the master bedroom.

When I see a shapely structure, there is a certain expectation I have before I even open the door to go inside. I know it is going to be something beautiful; something soft, yet formidable.