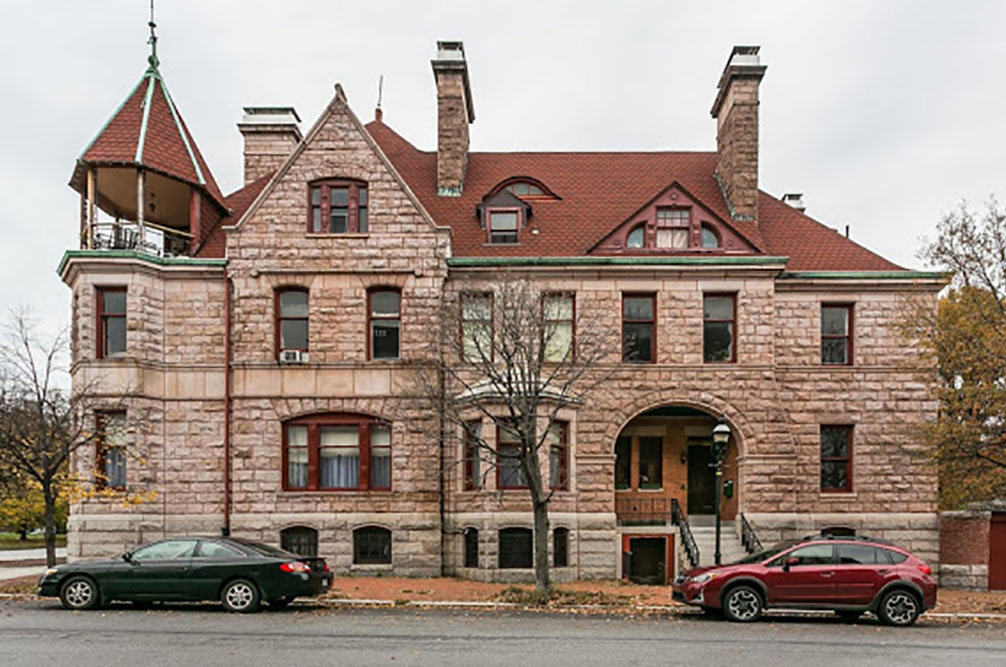 Have you ever stopped to consider what someone means when they say a house is character-filled?

Maybe it is a feeling you get as soon as you walk through its doors. That Je ne sais quoi, that certain ‘something’ that describes the essence of a house. But what about the characters, the actual inhabitants that lived and breathed between the walls and ceilings and floors?

That is exactly what I am thinking about as I hover like a specter through each formal room of the historic 1887 Hawley-Hutzler Mansion in Mid-Town Baltimore’s Bolton Hill neighborhood, in search of clues about who these families were and how they lived.

I have this romantic notion that I am eavesdropping on their personal conversations that are somehow tucked away in the details of stained glass, ornate woodwork and grand staircases. But I also feel like they have invited me in so that I can listen to and share their stories.

This particular story begins in 1887 when Martin Hawley, a prominent player in the lumber business, built one of Baltimore’s largest homes of its time for $70,000.

Throughout this 8,000 square foot Victorian mansion, all of the rooms are designed in unique ways. Each room features a different species of wood used in stunning millwork, arches, paneling and carved details. Whether Hawley used whatever surplus lumber was available through his business, or the eclectic mix of wood was a deliberate, creative decision, the result is spectacular.

Unfortunately, Hawley passed away not long after the mansion was completed. His widow Mary lived there for another decade before her death in 1897.

Enter the next cast of characters, the David Hutzler family. David and his wife Ella bought the Hawley residence shortly after Mrs. Hawley’s passing.

To Baltimoreans, the Hutzler name is immediately recognizable as the prominent retail family who founded and operated their department store chain for an astounding 132 years.

M Hutzler & Son department store opened in 1858 as a small dry goods store by Abram Hutzler. Abram secured the funding through his father, Moses Hutzler, a German-Jewish peddler, who signed the note backing the company. Soon after, two of Abram’s brothers, Charles and David joined the business, and renamed the department store to Hutzler Brothers. At the time of his death in 1915, David would be president of the company.

The single storefront would grow into a 10-store chain empire that would eventually extend to the suburbs. Hutzler’s downtown location was the premier department store in Baltimore and was the place to not only shop but dine, have your hair done, and get your shoes shined.  It enjoyed many firsts, including the first one-price policy, a liberal return policy, and Baltimore’s first escalator.

After more than 13 decades in business, Hutzler’s closed the family-owned business in 1990, but it remains an important part of Maryland’s history.

Change in ownership and purpose is inevitable as historic properties progress through the decades. David Hutzler’s family resided in the mansion on Eutaw Place for decades until the death of his wife, Ella Gutman Hutzler in 1942. The building became a Boys Town Home, followed by medical offices, and then finally reconfigured into apartments by another owner who purchased the property in the late 70’s. In 2019, the mansion went on the market “As Is”.

For some, As Is might mean an unwanted challenge; a property to avoid. For us, it is a passion project and an opportunity to bring that structure back to some form of its original life, and a chance to bring the original characters back to life too, making them once again relevant. And that’s what we’ll be doing with the Hawley-Hutzler house.