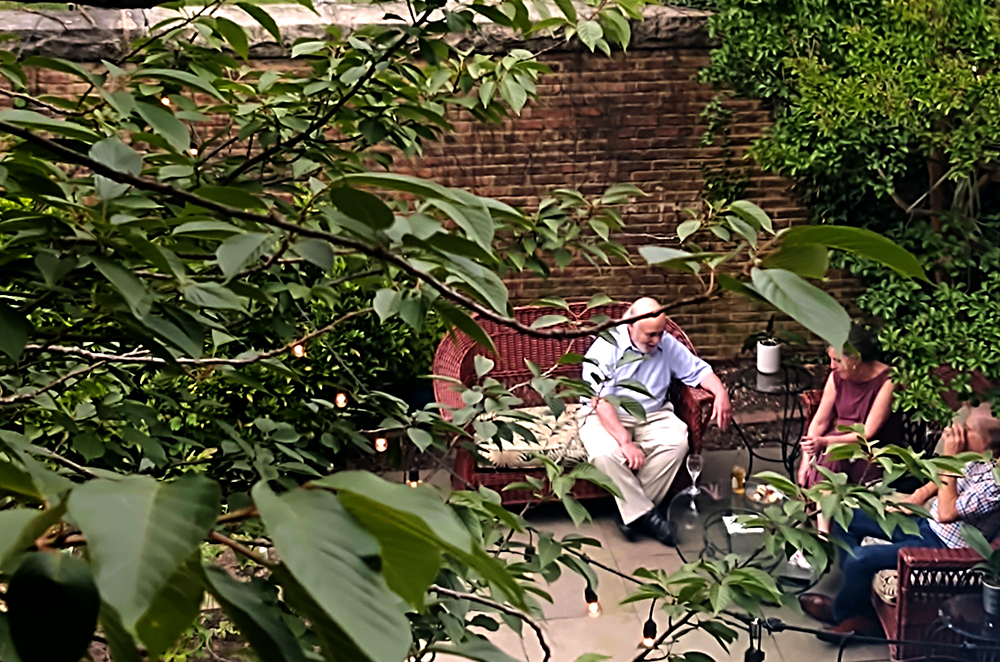 This. Garden. Though. If you have been following our blog preservation journey on the Hawley-Hutzler house, you will recall that it was the potential of this backyard garden that was the deciding factor convincing my wife we should go ahead and buy the house.

The 45’ x 48’ rectangular space, hidden behind 8’ brick walls, could easily have been the inspiration for the book, The Secret Garden by Frances Hodgson Burnett. In case you do not know the story, privileged, self-centered Mary, a young girl recently orphaned, moves to England in the late Victorian era to live with her disassociated uncle and his invalid young son, Colin. Mary and her cousin find the key to a locked and dying garden, bring it back to life, and discover the restorative and healing power of nature.

Victorians were enraptured with anything that had to do with the discoveries of nature, especially anything that was new and exotic. With the social and economic advances of the period, the wealthy had more leisure time on their hands, so they spent it creating beautiful garden spaces, not meant for producing food, but for entertaining and respite. One of the most notable design aesthetics of a Victorian era garden was the marrying of the house and the garden—the cohabitation of nature and architecture. Think vines trailing up a fence or the side of the house or a row of shrubs creating a wall that separates two outdoor “rooms”.

Though we have not yet found any photographs of the Hawley-Hutzler garden in its original splendor, we can imagine what formal gardens the time may have contained, like wild and exotic plants, ivy, roses, lilies, dahlias, ornamental grasses, decorative topiaries, stone walkways, statues, and fountains.

Unfortunately, over time, as one owner’s taste and style gave way to benign neglect and disuse, the garden was rather overgrown and a bit of a hodgepodge when we purchased the property. For example, in the early 1970’s the owner, Boys Town of Maryland, covered the entire garden in asphalt and turned it into a basketball court. The succeeding owner, an avid gardener, broke up the asphalt with a jackhammer with resolve to restore it as a garden with “rooms”. Not knowing until recently the garden’s basketball court past, we were curious about the garden corner which looked like an old road paving project. We have since transformed it. Our son broke the asphalt concrete, and I laid down flagstones on a sand bed to extend the patio.

It does not appear that anything currently remaining in the garden originated with the first owners, Martin and Mary Hawley. However, we were pleasantly surprised as we cut back invasive Japanese Creeper vines growing over most of the walls, to uncover English Ivy, with its dark rich green leaves, languishing yet managing to survive after being choked from the sun all these years. With a clean slate to work with, my wife, who comes from a family of gardeners,
jumped right into transforming the space.

Renewing the garden began with the removal of all the things that were struggling to grow — that were old and deteriorating, not receiving enough light, or had outgrown its space. These included spindly roses, Spring bulbs that no longer bloomed, azaleas, boxwoods, euonymous, liriope and mondo grass — which we donated to the City of Baltimore for transplanting to public spaces.

Since first moving in, my wife has monitored where the sun comes up and how it moves over the garden over the course of the day to determine what should be planted where. Of course, not everything in the garden has had to be overhauled. A stunning 29-year-old Kwanzan Flowering Cherry Tree is the centerpiece of the space and its huge canopy of pink double-blossomed flowers provides cover for the new shade garden below it, where she planted hostas, ferns, bleeding heart, and astilbe, to name a few. A 40-year-old Crepe Myrtle in the corner of the garden provides additional shade over the new flagstone patio which will be encircled by a bed of herbs against a taller backdrop of tropicals. We were able to establish the ages of the trees through conversations with previous owners, or their relatives.

Leafy exotics and tropicals like palms, cold-resistant banana trees, elephant ears, caladiums and textured begonias will create a living privacy screen between the dining and conversational patio areas separate from the lawn area. On the other side of it vegetable beds will line the brick wall paralleling the alley. Perpendicular to this, a bed of peony varieties, fox gloves and perennials will edge the walkway leading to the alley, with perennials, annuals and a cutting garden on the walkway’s other side lining the brick wall.

It is still a work in progress, but today, we call our backyard garden the “Ah Space,” because when you set foot in the garden, you immediately go Ahhhhhhhh. We have a framed picture in the house next to the door that enters the garden that reads, “When the world wearies and society ceases to satisfy, there is always the garden.” Taking a cue from the Victorians, our overall vision, once everything is planted, is for the space to be a welcoming sanctuary; an intersection of nature and architecture meant to be both pleasing, inspiring, and restful.