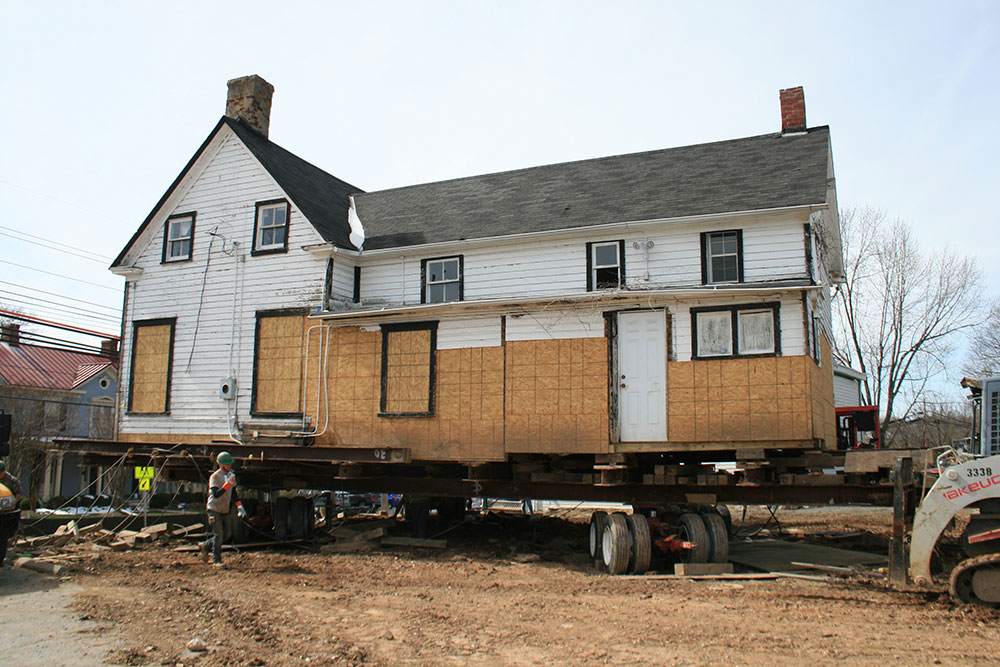 Whenever possible, moving a historic house or building is a better alternative than tearing it down. The process can seem daunting but there are expert movers who specialize in relocating historic homes, and they do it frequently. Here are some answers to frequently asked questions and examples of why and how to move a historic house.

Why would you move a historic house?

There are many reasons to consider moving a historic house or structure. It could be for safety reasons, aesthetic concerns, historic or cultural significance, necessary infrastructure upgrades like widening a street, saving the structure from demolition, or relocating it from a flood plain. The reasons are vast.

What do I need to do before moving a historic house?

First things first. Before moving a historic house, there are some very important considerations. Obviously, you need to know where it is going, and you also need to have a new foundation in place—or at least part of one to put the house on. We’ll discuss that further in the post. Some structural repairs or reinforcements may have to be made before the house can be moved. The process involves building permits, utility permits if power lines need to be raised out of the way, and other types of permits and permissions if you need to block off streets. You need to have disconnected water, telephone, and electric lines ahead of the move. You have to plan out the path that the move will take, keeping in mind the distance and the fact that the house may be larger than the vehicle moving it, and may be wider than many streets.

How do you move a historic house?

With patience, ingenuity and care. How you move the house might affect whether it can still meet qualifications as a historic building. This is important if Historic Tax Credits (HTC) are funding the project. If a building is moved horizontally from its original foundation, its qualification may be jeopardized.

There are several ways to move a house. One of the easiest methods is to simply raise the house by inserting steel beams under the house to provide a platform so the house can be lifted. For some larger houses, they’ll need to be cut into pieces and then reassembled once they’re moved. Believe it or not, large car jack like equipment can even be used. The method will depend on the structure. Since many historic homes have brick chimneys, the chimneys also need to be supported during the move. An expert moving company will have their own engineer who designs the structure that will support the house during transit.

Preparations upon arrival at the new site

A significant part of the preparation for moving a historic house is having the new site ready. That includes excavating and installing the foundation footings, but not the foundation in its entirety. Because historic houses are almost never perfectly square, it’s easier to build the foundation after the move, and then lower the house down, and remove the steel beams. Typically, the foundation is new and constructed using modern techniques. However, reusing the original bricks and stones when appropriate is always a plus.

Encore has taken part in several moves of historic buildings. In 2019, the Buffalo Soldier House, a historic house located in Easton, Maryland, had to be moved because it was too close to the sidewalk, and power lines were crowding one side of the house. The house was relocated over eight feet to put it out of harm’s way. The move involved steel beams inserted under the house, Ivory soap as a lubricant, and quite a bit of good old-fashioned elbow grease. The movers soaped the beams and literally pushed the house over to the new location, partly on an adjacent vacant lot. Because the Buffalo Soldier House was moved horizontally, (removing it from its original location footprint) it would have lost its National Register of Historic Places eligibility under the Secretary of the Interior’s Standards for Rehabilitation, but it is still a contributing structure in the National Register Easton Historic District.

The 18th century Dr. Horace Willson House in Clarksburg, Maryland is getting a second chance at life as a beer and wine shop after it was moved 70 feet to make room for a road extension. It was actually moved twice—first to the back of the lot, and then forward on the same lot where it found its permanent resting spot. The house is partially constructed of log floor joists with the bark still on, causing each log to vary in size, which made the move a little more challenging. The steel beams used to move the house required some shimming to account for the different sizes. Not to mention, the house had four chimneys that had to be supported during the move. You can watch a video of this move in action.

Originally built in 1899 as a schoolhouse, the Downes Curtis Sail loft in Oxford, Maryland is named for a well-known African-American sailmaker. Downes and his brother Albert rented the top floor of the building and made sails there for 50 years, until the 1990s. The new owners conducted a flood elevation survey, determined the historic house was in a 100-year flood-plain danger zone, and raised it three feet in 2001. The house raising couldn’t have happened at a better time as a year and a half later Hurricane Isabel caused devastating floods to the Mid-Shore in 2003, including Tilghman Street where the house is located, one of the lowest points in town. Despite being inundated with a three-foot water rise, the house remained high and dry although many of the surrounding houses were not as lucky and required FEMA assistance. The move was less complicated than some because the house sat on brick piers, which made it easier to insert the steel beams. Using equipment similar to old-fashioned car jacks, the movers raised the house upward, inch-by-inch. Because the house was only moved vertically, its historic status was preserved allowing the owners to receive Historic Tax Credits.

Moving a historic house is sometimes the only way to save it. The process might seem complicated with all the considerations involved, but there are expert architects and movers who specialize in relocating historic structures. Do you have a historic house you want to move or restore and renovate? Start with experienced professional like Encore Sustainable Architects for your historic building project.