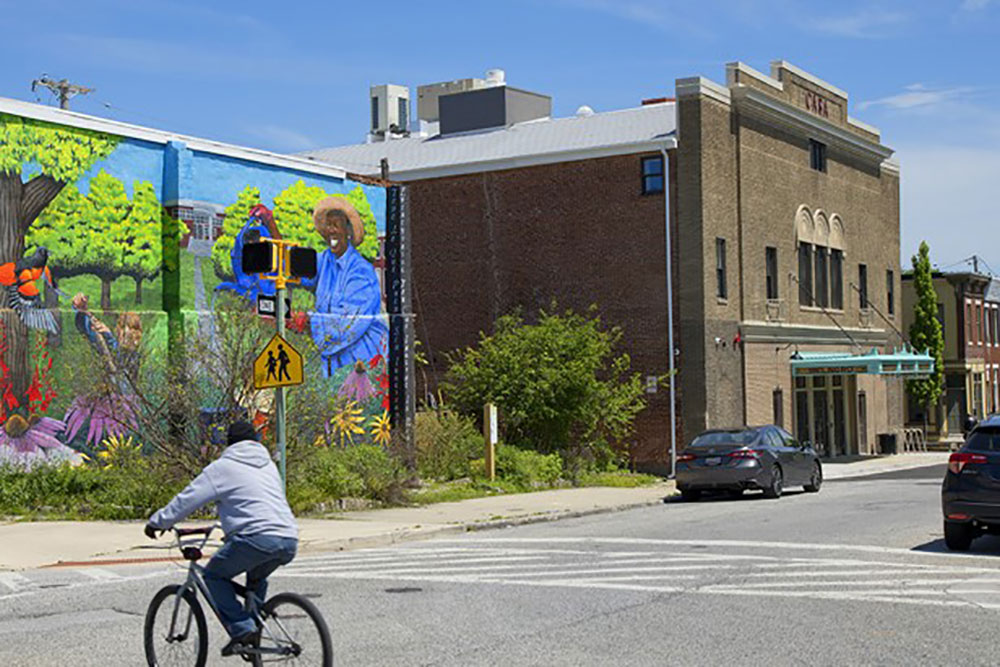 The History of the Belnord Theatre

In 1921, the historic Belnord Theatre opened in what is now the National Register East Monument Historic District. A minimal classical style structure, it is one of the largest theatres in the area. It served as a status symbol for the then thriving community, and for decades, the neighborhood took on the moniker of Belnord Square. Of cultural significance is that the theatre never segregated throughout its 45 years of operation in a mixed race community. However, in the decades following its theatrical use, the building and the neighborhood experienced the effects of waning industrial and manufacturing industry in Baltimore. With the disappearance of jobs, the community physically and spiritually fell into disrepair.

In the early 21st century, community groups and investors rallied to reinvigorate the neighborhood, now known as Library Square due to the location of the Patterson Park Branch of the Enoch Pratt Free Library. Unfortunately, the recession stalled efforts in 2009. In 2013 plans were again drawn to revitalize the area, and over the next seven years,numerous community, nonprofit, government and for profit organizations worked together to preserve neighborhood history and empower the community’s future. The Belnord Theatre, with its huge presence on Pulaski would prove to be the capstone of the efforts

The Goal: Impact a Community

CASA de Maryland, a nonprofit devoted to improving the quality of life in working class and immigrant communities, had been serving the community for several years from East Fayette Street, a few blocks from the Belnord Theatre building.  CASA had outgrown their space, and with community members expressing the need for on-site vocational training programs, expanded services, and youth programs, the Theatre held promise.

The challenges of transforming a building of this size and age to a modernized structure for an entirely different use while retaining historic fabric and achieving the goal of LEED Gold Certification and sustainability were many.

For example, the entire upper half of the Belnord Theatre was closed off with a ceiling and modern lighting when the building was used as a grocery store and nightclub.  The first step was to remove the ceiling to discover the original balconies and domed ceiling hidden behind it.

The 28 foot high, 32 foot in diameter, domed ceiling at the Belnord Theatre is delicately suspended by scores of wires, and it posed several challenges during this project.

First, it created an impossible echo and could not be removed as it was a historic design feature critical to historic tax credits. With adaptive reuse design plans including the main flex use space directly below the dome, we devised a solution involving foamy acoustic plaster and sound absorbing insulation. A second conundrum involved how to regularly change the lightbulbs – screw-in type originally – in the 28 foot high ceiling. Flexible LED strip lights were swapped in to reduce electricity use and eliminate bulb changing.

CASA’s project required adding administrative space to serve its clients. Enclosed space was added by cantilevering meeting pods over the stepped balcony floor leaving aisles between the pods. The balcony was then restored in gorgeous color and was transformed from open seating to functional second and third floor offices and training space (shown below). The Belnord Theatre is truly an amazing example of adaptive reuse.

The front façade and its copper sheet metal marquee were built in the pared down classical architectural style fashionable in 1921. By the time CASA acquired the building it had lost its marquee, entrance doors, and windows. An extremely high quality early photograph supplied by the Maryland Historical Society enabled accurate restoration of the façade and marquee, including the backlit colored glass signage. Later awnings, stucco, and tar coverings were removed from the brickwork while retaining the patina of age.

When Encore’s historical architects first explored the Belnord Theatre, we discovered that the theatre was an eclectic mix of traditional designs like the Greek Key pattern above, lovely decorative leaves and domed ceilings.

All original finishes below 10 feet from the ground floor had been removed, and everything above was hidden behind a modern drop ceiling (upper left image). When the ceiling tiles were removed it was clear that the exposed and damaged historic fabric and spaces should be restored.

The restoration of the underside of the balcony features the eye popping signature CASA red and restored Greek Key pattern. These historic accents are visible throughout the many classrooms, flex spaces and more, injecting history into modern, adaptive spaces.

“It is amazing what we’ve created out of that property.  It was the perfect location, but the wrong building for this Center – structural issues, space limitations and historic requirements made it a challenge, but the team rose to, and conquered, the challenge,” said Bob Brehm, Project Manager, Organizational Assistance LLC.

“When you are part of a project like this, you see one part, from your perspective, at the beginning. But you’re financing a dream – a collective one. “ said Dana Johnson, Managing Director of the Reinvestment Fund.  “I remember walking through the dust and debris early on in the project, and now it is just beautiful. Functional. Welcoming. The team was visionary in seeing the potential of the Belnord Theatre and executing its transformation. This is a group that will pay huge dividends in the community they serve.”

Encore Sustainable Architects is delighted to share that in August 2020, the Belnord Theatre won a Preservation Maryland Best of City of Baltimore Stewardship Award.