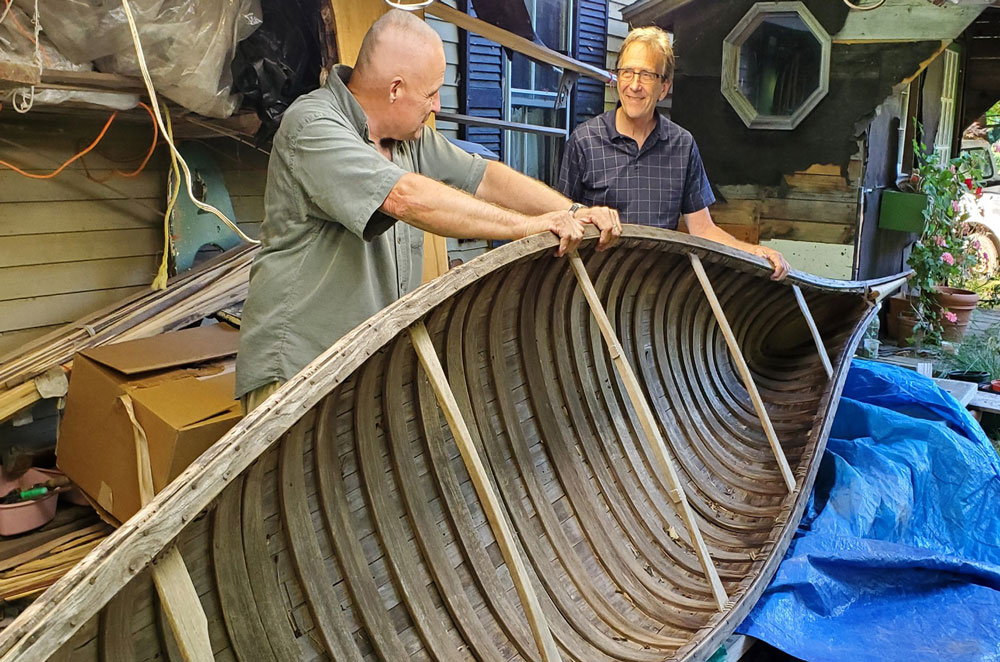 In 1965, Henri Vaillancourt, of Greenville, New Hampshire, built his first bark canoe by hand; the same way the first people of Canada did. He made only 200. Our family is the proud owner of one of them.

I first became infatuated with Vaillancourt’s birch bark canoes when I saw them featured in a craft artisans exhibit at the Smithsonian Renwick Gallery in 1974.

Henri’s handmade canoes are built along the same traditions of the birch bark canoes made by the First Nations of Malecite, Abnaki, and Algonquin, as well as those developed by the French voyageurs during the fur trade period—using the same tools: an axe, a crooked-handled knife, and an awl. Henri is arguably the world’s foremost expert on the construction of a birch bark canoe.

I placed an order for one of Henri’s 14’ canoes to give to my father for Christmas. Because Henri could only build approximately 7 canoes in a year, the finished canoe had an unknown ETA. I instead attached the picture from the Smithsonian catalog I had to a wood paddle and presented it to my father. In 1979 my father and I drove up to Henri’s house in New Hampshire to collect the finished boat and bring it down to Westchester County, New York.

There’s something almost unnatural about using something so beautiful in a utilitarian way, without a single straight line. But I’m quite sure when Henri began making his boats, he didn’t foresee them as collectable objects d’art, given their long practical history and the role they played in opening the wilderness to commercial navigation.

In his book, The Survival of the Birch Bark Canoe, Pulitzer Prize winning author John McPhee chronicles the long history and craft of birch bark canoe making, incorporating the story of his 150-mile canoe journey through the Maine woods with Henri and three others—an experience full of memorable successes, challenges, and eccentric companions—namely Henri.

As McPhee writes in the book, “(Henri) proved to be as headstrong in the woods and on the water as he was artful and deliberate in his shop…” They endured a strong headwind that produced high waves, deep troughs, and spray, which Henri “dictated that we ignore this forbidding condition and cross the lake.” Soon, they were taking on water and one of the other passengers, after calling Henri a lunatic, said “head to shore!”

Clearly the canoe maker and the canoes were destined for adventures. Making his own wilderness memories, my father loved that canoe. He belonged to the Camp Fire Club of America, the Teddy Roosevelt Association, and the Civilian Marksmanship Program. He used the canoe on outings, canoe races, fishing, and shooting expeditions, paddling, sitting and standing up. He was an outdoorsman for sure. Competitions were a regular part of his outdoorsman life, and my father’s claim to fame was the campfire pancakes competition. With a log, a hatchet, a knife, and ingredients, he could start a fire and cook a pancake in 4 minutes and 33 seconds!

After years of ferrying my father through his outdoor passions, the canoe eventually passed back to me where I kept it hanging from the back porch ceiling between outings with my boys. Over the years the tree root lashings holding the edges of the bark fell apart. There was no one but the original builder that I would trust with the restoration. So, after waiting my turn for a couple of years, I took it back to Henri to fix it.

This past winter, the canoe was returned again—with the original birch bark good as new—and ready for her next adventure.

On Father’s Day, my son Jack, a good friend, and I took my father’s restored birch bark canoe to Prettyboy Reservoir in Miller, Maryland, a rural area northwest of Baltimore. We were treated to the sight of a pair of blue herons and the sounds of the Cicada chorus as we paddled idyllically in the summer waters without a building in sight. Then, a bit like that infamous Henri and John McPhee trip, we were required to do some bailing of our own. We unfortunately forgot that the canoe needed some time in the water for the wood decking to swell enough to make it watertight.

So now, three generations have had the pleasure of paddling in a Henri Vaillancourt canoe, each one with its own stories to pass along, not just about our adventures but about this rescued art form of canoe building.

History, art, architecture. We love what we do; let us do it for you. We’d love to hear about your project.