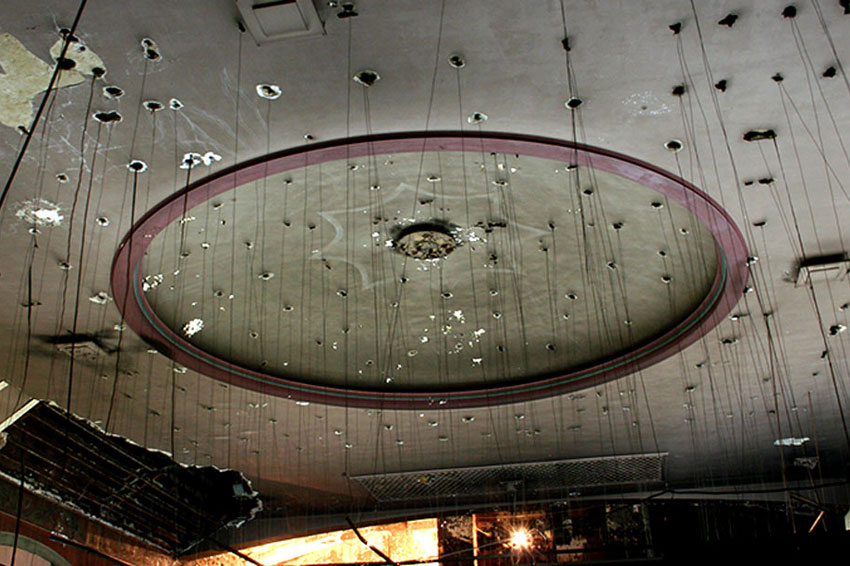 This month we’re counting down the days to the March “premiere” of the Belnord Theatre.

CASA de Maryland will use the finished historic and green building to serve a planned 11,000 annually as a regional employment and education center. The new CASA Baltimore Regional Educational and Employment Center at the Harry and Jeanette Weinberg Building will include a vocational training lab, job dispatch center, and space for classes, services, youth programs, and community gatherings.

Each week in February we’ll share a sneak peek of the amazing transformations occurring at the theatre. 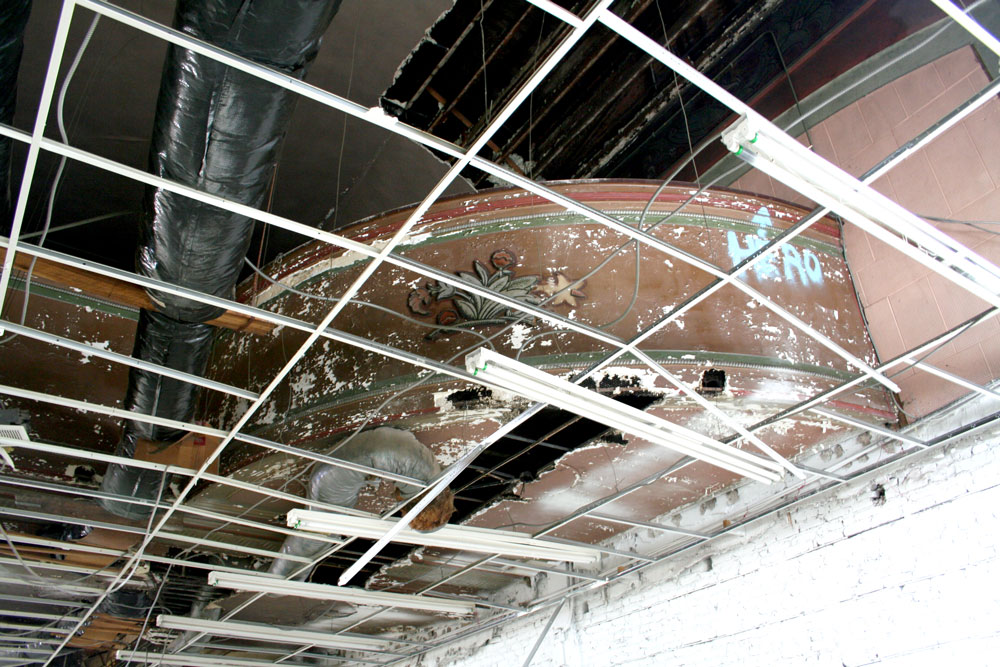 This image shows how the entire upper half of the Belnord Theatre was closed off with a ceiling and modern lighting when the building was used as a grocery store and nightclub.  The first step was to remove the ceiling to discover the original balconies and domed ceiling hidden behind it.

Watch as the balcony of the theatre is restored in gorgeous color and is transformed from open seating to functional office and training space. The Belnord Theatre is truly an amazing example of adaptive reuse. 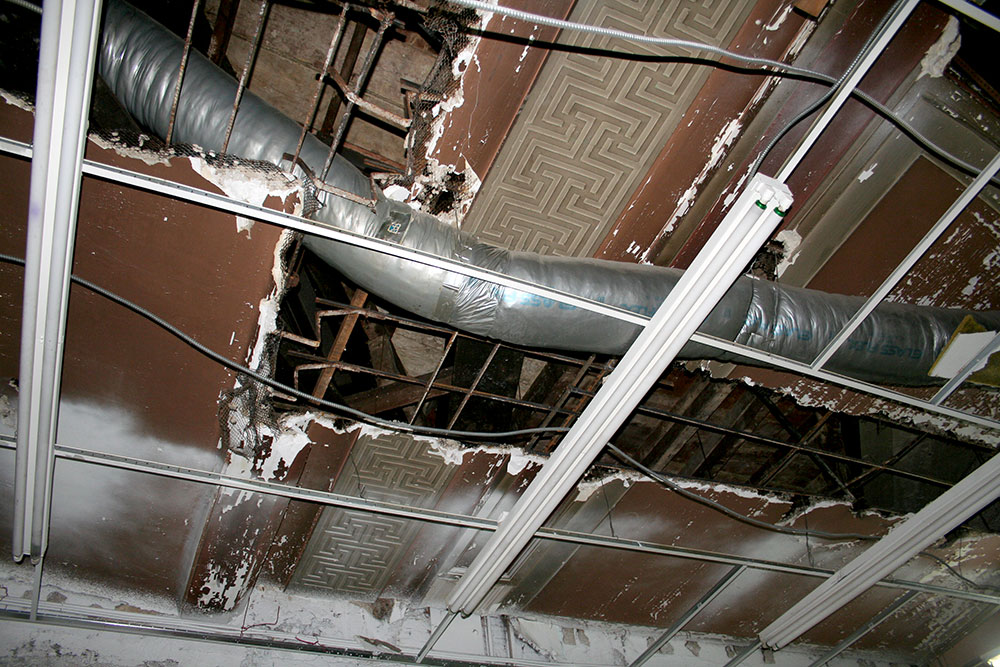 When we first explored, the Belnord Theatre, we discovered that the theatre was an eclectic mix of traditional designs like the Greek Key pattern featured in this post, lovely decorative leaves and domed ceilings.

As we mentioned in Week 1, all finishes below 10 feet from the ground floor had been removed and everything above was hidden behind a modern drop ceiling. When the ceiling tiles were removed it was clear that the exposed and damaged historic fabric and spaces should be restored.

In this animation, we see the restoration of the underside of the balcony which features the eye popping signature CASA red and restored Greek Key pattern. The pattern, also known as a meander or meandros, is a decorative border constructed from a continuous line, shaped into a repeated motif. It mimics the path of the ancient Maeander river in Turkey. These patterns are found across cultures, continents and centuries. Now that is an influential design! 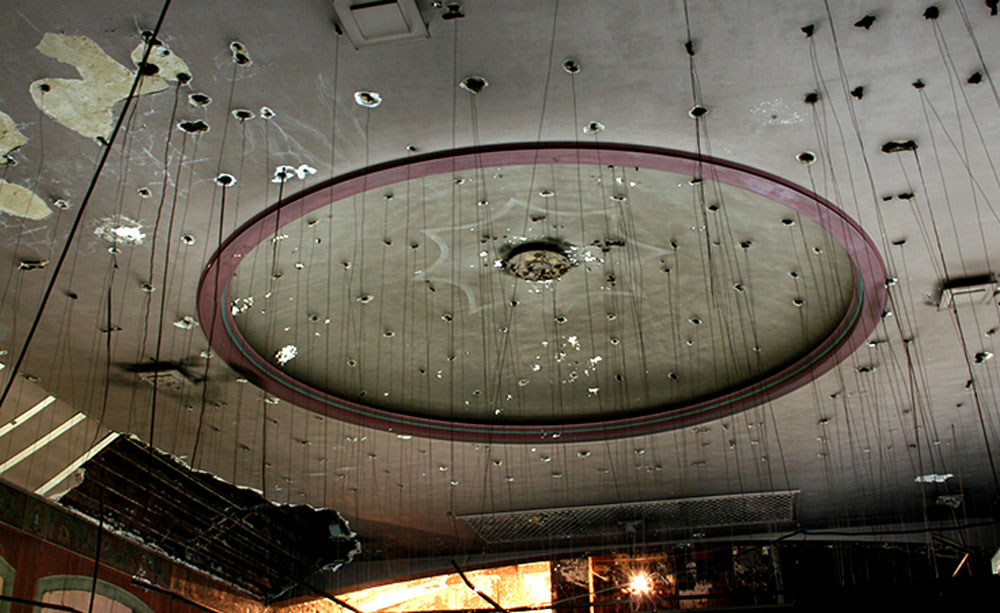 The 28 foot high, 32 foot in diameter, domed ceiling at the Belnord Theatre is delicately suspended by scores of wires, and it posed several challenges during this project.

First, it created an impossible echo. You could not even hold a conversation beneath it. That said, it could not be removed as it was a historic design feature critical to the receipt of historic tax credits. With adaptive reuse design plans including the main flex use space directly below the dome, we needed to find a solution. We ended up using acoustic plaster, a foamy plaster, backed up by sound absorbing insulation. The off white colored ceiling around the dome in the image below is actually stretched cloth over acoustic insulation vs. traditional plaster.

A second conundrum involved how to regularly change the lightbulbs – screw-in type originally – in the 28 foot high ceiling. Flexible LED strip lights were swapped in to reduce electricity use and eliminate bulb changing.

This amazing project is the result of a large team of partners including:

Learn more about the finished project.