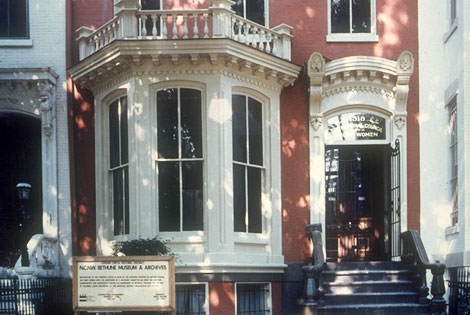 Encore’s Ward Bucher served as principal and historic architect on a National Council of Negro Women Museum and Archives project involving the restoration and preservation of the Mary McLeod Bethune Council House as a museum and archive.

The building was originally built in 1875 as one in a set of three row houses.  The builder took what would become the Bethune house as his own residence. Silver-plated hardware and detailed faux bois woodwork are clear upgrades in the interior design of this building vs. the other two.

The building however is restored not to 1875, but to its state in 1941, when its historical value is linked to the ownership of the building by Mary McLeod Bethune, a prominent civil rights activist, who used the building from 1943 to 1966 as the first headquarters for the National Counsel of Negro Women – which she founded in 1939.  Photographs of the interior and exterior of the building at this point in history were important to maintaining the historic fabric of the house.

The exterior of the building involved the replacement of and/or custom fabrication of moldings, a wrought iron gate, and a cast iron flower urn.  Interior work involved refinishing the pine floors, repairs to a water damaged ceiling and replacement of run and cast plaster molding as well as the restoration of extensive faux bois graining of woodwork (Burly walnut, burly maple, and mahogany) throughout the first floor. While 95% of the silver-plated hardware in the home had been stolen, inlayed hinges remained hidden and were used to model the missing pieces. The original chandelier was altered from gas to electric, and new HVAC and museum lighting were added.

The historic pedigree of the house includes:

Ward received a Historic Preservation Citation for Preservation Through Restoration and Extended Use for his work on this Washington DC historic preservation.  Tours are held by appointment and on select days of the week.  A recent tour of the property featured photographs, original furnishings used by members of the NCNW and a cellist and violinist performing Bethune’s favorite tunes from the era. 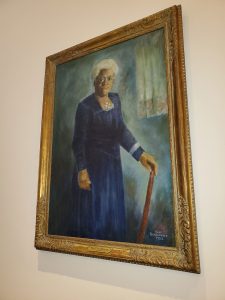 The namesake for the house, civil rights activist and founder of the National Council of Negro Women, Mary McLeod Bethune. 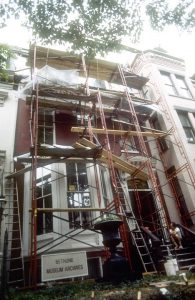 The exterior of the Bethune Museum undergoing historic preservation work. 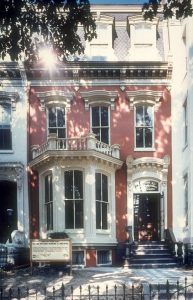 The restored façade of the Washington DC historic preservation of the Bethune Museum with new balcony balustrade and brackets. 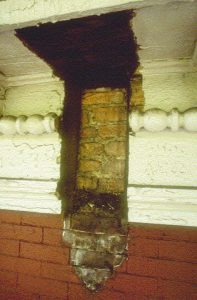 A missing bracket from the exterior of the Bethune Museum. 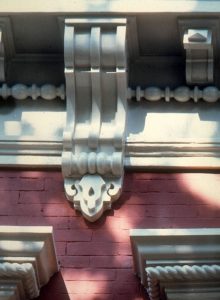 The restored bracket for the Bethune Museum, a Washington DC historic preservation project. 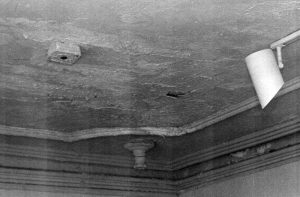 The damaged and deteriorating ceiling with concealed molding prior to resotration. 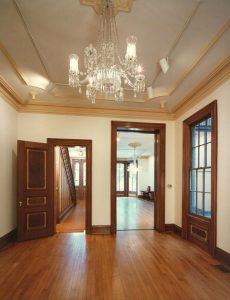 The beautifully restored ceiling, floors, faux bois woodwork, and chandelier. The latter was also converted to electric from gas.

Principal Architect on the Mary McLeod Bethune Council House preservation, Ward Bucher, points out original silver-plated hardware. The majority of the hardware was stolen from the home, but the difficulty in removing these, helped preserve them in place. 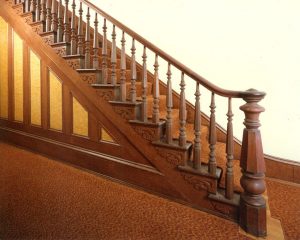 Woodwork throughout the building had been painted over and was restored to its original faux bois decoration. 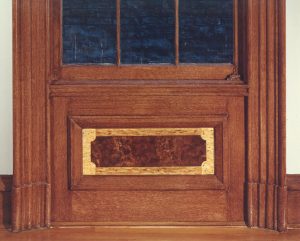